This page gathers testimonies received in memory of Claude Berthier. If you wish to contribute, do not hesitate to contact us.
M. Horvatic, S. Krämer, H. Mayaffre, M.-H. Julien 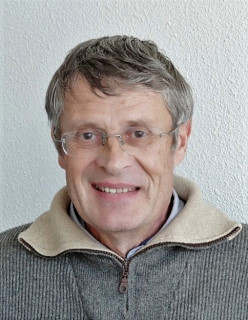 Laboratoire National des Champs Magnétiques Intenses (LNCMI) and its NMR group mourn the loss of Claude Berthier, passed away on June 27, at age 71.

Claude Berthier was a CNRS Research Director and the leader of the NMR group at Laboratoire de Spectrométrie Physique and at LNCMI in Grenoble, where he was a deputy director. He was an internationally recognized specialist of nuclear magnetic resonance and its applications in high magnetic fields, rewarded with several prestigious scientific awards. An ambitious experimentalist with remarkable knowledge of theory, Claude conducted numerous pioneering endeavours in various domains of condensed matter physics: impurities in metals, polymer electrolytes, charge density waves, superconductors, 2D electronic gas, quantum magnetism, and Dirac quasiparticles. For all who knew him, he was an example of openness and generosity; he openhandedly devoted his time to serve the community and, above all, he loved to work and discuss with young researches, always offering his encouragement, support, and his unparalleled knowledge.

Claude, my dear boss and friend, I will miss you so much

He was such an inspiration.

I liked Claude so much as a scientist and as a person.

I can hardly imagine how big is the loss for all the community. As I read the news, I felt the need to remember how much Claude was an example well before being a mentor and a teacher.

We have always very much enjoyed our collaborative effort within the Euromagnet project, in particular the good atmosphere in Grenoble during our project meetings.

He will be greatly missed.

I personally know Claude from early 1990, and miss him with deep grief.

We knew Claude was a wonderful person not only as a researcher but also as a human being.

He will certainly always be remembered by his enormous contribution to science.

He was a fine scientist and man.

He was a truly great leader of NMR community in the world.

He was more than a great scientist.

I always enjoyed talking to Claude as he was an excellent listener and an original and powerful thinker. He was a more than a great scientist; an inspirational mentor and warm-hearted friend. He will be always missed

It was always pleasant to meet and talk with Claude not only about science, but also about everyday life. I remember how important for me was his attention and support to my spin-nematic work in LiCuVO4.

Claude put my carrier on track when I was new to NMR. I will never forget it. The few weeks I spent in Grenoble where pure magic. I fully agree with your words “he loved to work and discuss with young researches, always offering his encouragement, support, and his unparalleled knowledge”. I feel a great loss.

Personally, I had the opportunity of discussing with him a (too) few times, and experienced him as an extremely capable, friendly and encouraging person. People of his caliber/qualities are, I think, essential pillars and lighthouses of society and science.

I also remember Claude with pleasure and as a very pleasant and kind person, in addition to his undisputable scientific value.

Claude was a teacher, colleague, and a good friend. With him again one great chapter of NMR – history in Europe, and in whole world has been closed.

I profited a lot from the chance to know Claude, from almost coming to do post-doc with him, from multitude fruitful and useful discussions with him, especially over those dozen last years working on high-field projects with him. Last but not least – his enthusiasm to Japan, introducing me to Grenoble and “Saigon”, and my very first lesson on how to properly handle chopsticks…

He was a warm-hearted, thoughtful, and great professor. Claude, Ichiban!

We appreciate that we could meet Claude in person in Trogir, here at the IFW Dresden, and at the Euromar conference in crete, and got to know him as a pleasant, agreeable person with a vast knowledge on NMR and condensed matter physics. This is for sure a great loss for the NMR condensed matter community.

What a loss. Professor Berthier indeed was a distinguished scientist and a bright personality. Although I did not have the fortune to work with him side by side, reading his works and communicating with him in person shaped me professionally to a great extent.

I still remember meeting Claude in the APS meeting, where he selected me to join his group. It was a blessing to me, to get the opportunity to work with him and you all. My experience at LNCMI, is one of my most cherished memories. Apart from Claude’s academic excellence, I will always remember the discussions on many non-academic topics, the groups lunch sessions, the short trip, and above all his sense of humour and zeal in spite of his health.

Although we worked with him only a couple of times, we certainly appreciated his readiness to discuss new results, make relevant remarks, and propose new ideas.

Toni Shiroka, Zürich (on behalf of the NMR group at ETH)

We lost a great master and a best friend. I feel very lucky to have wonderful times to work with Claude at Grenoble. His profound knowledge and great personality always inspire me to become better. I learnt a lot of things from Claude and this will be the wealth of my life.

In the Spring, I attended a Memorial Service for Charlie Slichter. Claude and Charlie provided many wonderful examples of how NMR can be used to solve fascinating puzzles in condensed matter physics. They will, indeed, be sorely missed.

It’s a sad day for NMR. We lost another great resonator.

I have very fond memories of first meeting Claude and interacting with him scientifically in the mid-1970’s when we shared an office in Denis Jerome’s group at the Laboratoire de Physique des Solides, Batiment 510, Orsay. In later years I always enjoyed and benefited from talking with him.

I leant from him a lot of things starting in the late 1970’s when he was working on CDW’s and I was also interested in the problems. He was always generous with his time and patient in explaining his experiments and always welcoming of theoretical ideas.

Claude will indeed be very much missed.

I informed all colleagues from Pavia, Milano and Parma who knew Claude and all of them are very sad that he passed away. Even if they have met Claude just occasionally, all of them, Attilio, Alessandro, Roberto, Maurizio, etc… appreciated his special sensitivity and kindness, as well as his talent at work.

He was a great scientist and a very warm and engaging individual. He will be sorely missed by the community at large.

To me, Claude was one of the giants in high magnetic field research. He was always a gentleman scientist, interested in discussing both the big ideas and small measurement details of every experiment. I will miss him.

I remember him with affection thinking about the early years of my scientific career, when I saw him discussing animatedly (I was very impressed, maybe even him) with David Pines, who also recently passed away. I have always admired him for the high quality of his (then your) works.

Claude was brilliant, kind, gracious, generous, and a bon vivant (à la fois). He was a towering figure in my life and in my career. I will forever hold deer our frequent conversations on Skype, when we had discussions on physics with great enthusiasm, and inevitably, ending it with our latest discovery in wine. I had the privilege to know Claude, I will miss our talks, and I will miss him as a mentor, friend, and academic father always.

To Claude, a brilliant scientist though full of modesty, a friend for forty years. His enlightening views on polymers electrolytes published in 1981 is still the most cited paper in the field… We miss you!

Opening ceremony at the 12th International Conference on Materials and Mechamisms of Superconductivity and High Temperature Superconductors, Beijing, August 2018: 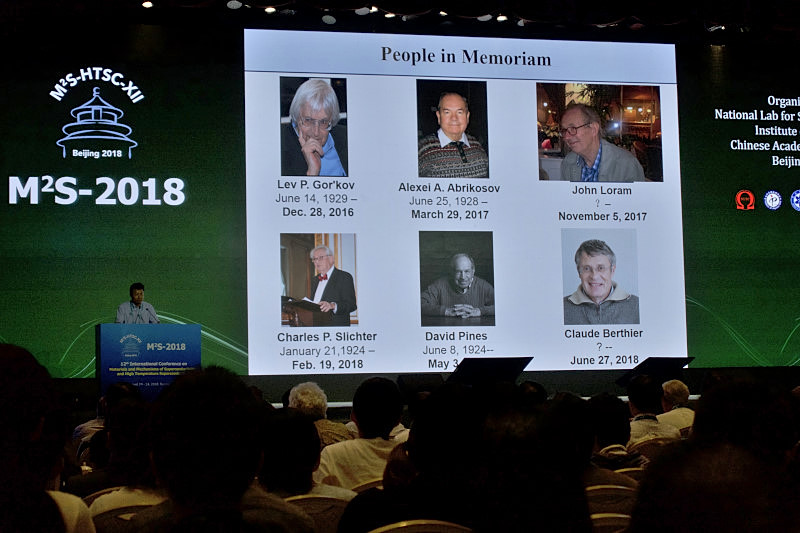 In summer 2011, the head of the Grenoble Solids NMR group Claude Berthier celebrated his 65th birthday and acquired the status of emeritus researcher. We organized a one-day meeting with his (former and current) collaborators, post-docs, students and friends on September 16th 2011.