In a class of materials known as strongly correlated electron systems, the standard model of electrons in solids breaks down because strong electronic interactions are present. When strong enough, this interaction forces electrons, which in ordinary metals behave as delocalised waves, to localise and behave as particles. Those materials show a luxuriant array of fascinating new states of matter in which magnetic, charge, orbital and structural orders compete for the ground state. In addition to being one of the most complex and greatest intellectual challenges of modern science, some of those materials also have great technological potential : cuprate superconductors and high thermoelectric power materials provide new technological solutions to growing problems of energy storage, transportation and production. 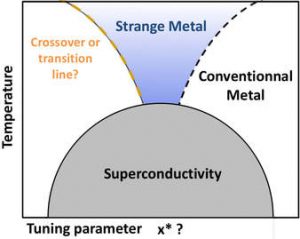 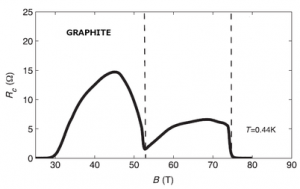 A magnetic field can induce unusual electronic ground states, such as the quantum Hall effect for a twodimensional
(2D) electron gas. In the limit where only the n = 0 Landau level is populated (the so-called quantum limit), electron interactions are responsible for the appearance of a variety of many-body ground states such as the fractional quantum Hall effect. In contrast to the 2D case, the electrons in the quantum limit of a three-dimensional (3D) gas has been poorly explored. We study semimetals, such as graphite, where the quantum limit can be achieved with current magnet technologies.